The King of Instruments & The Instrument of Kings

Bryson City is excited to serve as host for the dynamic duo of Chuck Seipp on trumpet and Randall Sheets on organ/piano on Saturday, November 11 at 5 PM. 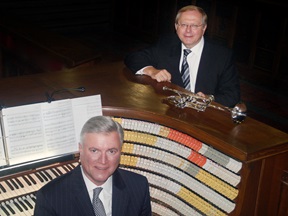 Trumpeter Chuck Seipp arrived to the Shenandoah University Conservatory of Music faculty fall of 2013 as Adjunct Associate Professor of Trumpet. He most recently was Visiting Assistant Professor of Trumpet at Texas Tech University from August 2012 to May 2013 and prior to that, performed extensively throughout the United States and abroad as member of The United States Army Band, “Pershing’s Own” retiring in August 2012. Culminating his 32 year career with The Army Band as Concert Band Group Leader. Sergeant Major Seipp performed in national, presidential and historical world events as well as numerous significant ceremonies, concerts and special events in Washington, D.C. as well as funerals and wreath laying ceremonies at the Tomb of The Unknown Soldier in Arlington National Cemetery. He performed with the Concert Band, Orchestra, Ceremonial Band, Herald Trumpets, Brass Quintet and was featured as soloist with the Concert Band, Orchestra and Brass Band. Chuck has toured and recorded solo trumpet and organ repertoire throughout Europe with world –renowned organist Diane Bish—appearing regularly on her “Joy of Music” television series as trumpet soloist as well as several performances with The U.S. Army Brass Quintet. Through CJ Seipp Music Publications, he markets his own brass arrangements, many of which have been played and recorded by the Canadian Brass Quintet, The U.S. Army Brass Quintet and many other groups around the world. Chuck’s recording project of “The Wedding Book”, a collection of his own arrangements prove to be a valuable resource for organists and trumpet players nationally and internationally. As an active teacher, soloist, clinician and performer; Chuck performed locally with the National Symphony, Orchestra, Washington Opera House Orchestra, Washington Ballet Orchestra, Washington Bach Consort, and leads The Commonwealth Brass Quintet. Chuck holds an Undergraduate Music Education degree from The University of Kansas and both Master and Doctoral degrees in Trumpet Performance from The Catholic University of America. Chuck is a Yamaha Performing Artist.

Randall Sheets began his musical studies in piano and organ while growing up in North Carolina. He holds degrees from Wittenberg University and Bowling Green State University, and received his doctorate from the University of Maryland. Throughout his graduate study Dr. Sheets taught at the University of Maryland and the Smithsonian Institution, and later taught at the Levine School of Music, the National Cathedral School, and the Landon School. His scholarly work includes several published articles and many lecture-recitals. In 1986, he was awarded the Liszt Commemorative Medal by the Hungarian Minister of Culture for his work as Festival Director of the Franz Liszt Centennial Celebration held in Washington, D.C. An extremely versatile musician, Randall Sheets has worked full time as a church musician for twenty-nine years. In that time he has performed as organist and directed choral ensembles, bell ensembles and concert series. For the past nineteen years Dr. Sheets has been Ceremonial Organist for Arlington National Cemetery where he performs over 1000 services a year in the historic Old Post Chapel and the Memorial Chapel. In addition, he is the Organist/Music Director at Culpeper Baptist Church, and Organist for the First Church of Christ, Scientist, Mount Vernon. During his tenure at Fort Myer he has produced and performed five CD recordings of choral, organ, and instrumental music. Concert appearances as a solo organist include programs at National City Christian Church, The Basilica of the Shrine of the Immaculate Conception, St. Luke’s Catholic Church, McLean, and historic Bruton Parish in Williamsburg, Virginia.